With Halloween behind us, we start looking forward Thanksgiving.  While a select few  members of this family actually like pumpkin pie, we do like all kinds of other pumpkin desserts, like these wonderful little whoopie pies from my ever favorite and never disappointing Fine Cooking. I hardly modified the recipe at all, other than to add some orange zest to the buttercream because pumpkin and orange just go beautifully together. I also only used about half the buttercream that the recipe states for each whoopee pie and here is where the ratings were split. I thought it was plenty of cream but my buttercream loving taste tasters wished that more cream was involved. I did double the recipe for the dough, one didn’t seem enough for our group. 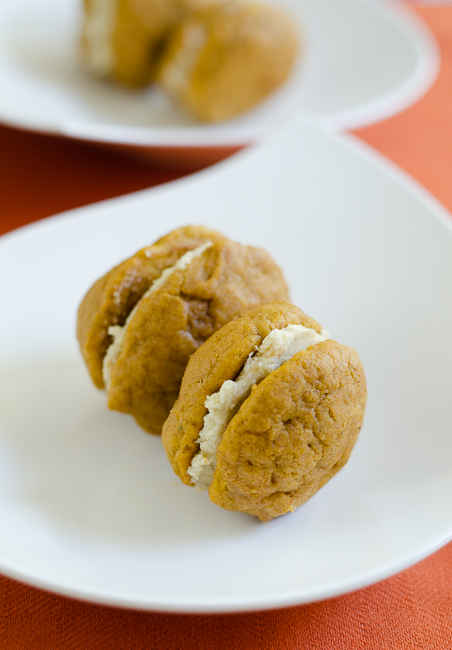 For the cinnamon cream

Set the oven rack in the lower third of the oven. Preheat the oven to 400°F. Line two baking sheets with parchment paper or nonstick silicone baking mats.

In a medium bowl, sift together the flour, baking soda, baking powder, salt, cinnamon, nutmeg, and cloves; set aside.

In the bowl of a standing mixer fitted with the paddle attachment, combine the butter, brown sugar, and granulated sugar and beat on medium-high speed until light and fluffy, about 2 minutes, scraping down the sides of the bowl halfway through. Beat in the oil, egg, and pumpkin puree, beating until blended after each addition. With the mixer on low speed, beat in the flour mixture in three batches, alternating with the milk.

Scoop 8 scoops of batter with a #40 ice cream scoop or 2 tablespoons’ worth, about 2 inches apart, onto each of the prepared baking sheets. Baking one pan at a time, bake the cakes, rotating the sheet about two-thirds of the way through the baking time, until a cake tester inserted into the center of the cakes comes out clean, 8 to 10 minutes. Remove the baking sheets to cooling racks and let the cakes cool for 10 minutes. Then remove to the rack with a metal spatula and allow to cool completely.

To make the cream

In the bowl of a standing mixer fitted with the paddle attachment, combine the butter, superfine sugar, cinnamon, and salt and beat until light and fluffy, and until the sugar has dissolved and is no longer gritty, 5 to 10 minutes. Scrape down the sides of the bowl about halfway through. Beat in the vanilla. Transfer to a small bowl; set aside.

In a small saucepan, whisk together the flour and milk until smooth. Cook over medium heat until the mixture forms a very thick paste and the flour taste has cooked out, 6 to 10 minutes.

Transfer to the mixer bowl and beat until completely cool. Beat in the butter-sugar mixture on medium-high speed until light and fluffy, 4 to 5 minutes.

With a small spatula or butter knife, spread the flat sides of 8 of the cooled cakes with about 2 Tbs. of the cinnamon cream. Top with the remaining 8 cakes.